It has been such a while. I have bad news and good news to report. The bad news is I still have not had the viva, yep you read right. There been two postponements. That is right, two! Both due to examiner then supervisor ill heath. The good news is everyone is alive, well and ready to go and I have the viva now scheduled for next week. In terms of development, I have been speaking and writing and tweeting about the study and its results which have helped me keep things in my head.

I have been offered a Senior Psychologist role and An Ajunct Professor of Cross Cultural Psychology post. I have accepted both roles which will allow me to pursue some of the issues I have researched/found. So actually that is three good news.

I have been silent, I realise. This is because I have been busy submitting the thesis and, I am now preparing for my viva. I am quite happy with what I have produced, despite the many hiccups along the way, including a very stressful one related to references…but almost there hopefully. Will post results of viva soon.

I am glad to say I have written and submitted my first draft of the thesis and received really good feedback. I am working on improvements based on suggestions, most of it cosmetic. Summative submission is in less than two weeks and viva is in about 6 weeks. 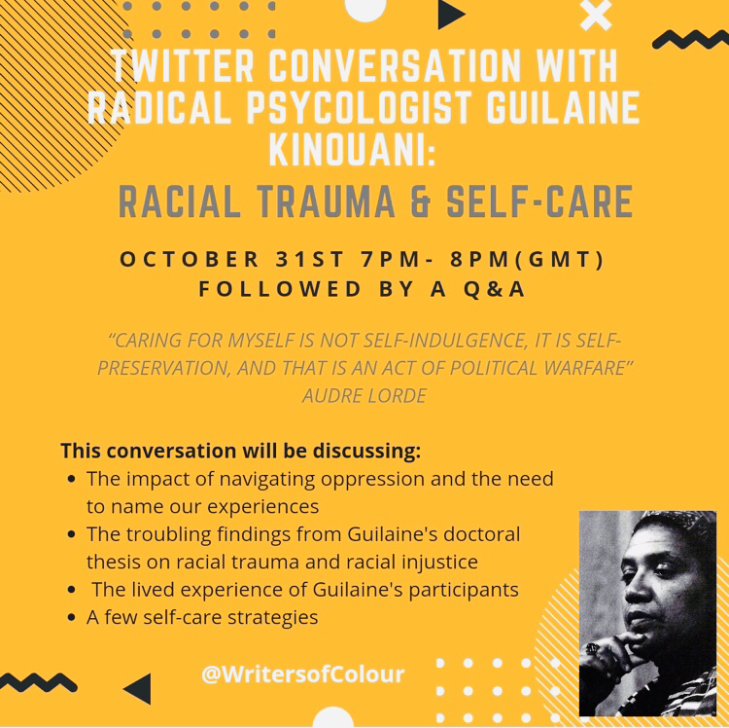 Just waking up from a 16 hours study day. Of course feeling tired but knowing this is what I need for this final push. I think I had braced myself this moment would come.

The main struggle at the moment is still classifying racist & racially unjust events/acts/processes. Again the sheer volume…, 317…may go up slighly. I am starting to wonder why I took this on, this is not something anyone expected, surely? Supervisor has said it was a ‘good plan’ but I did not hear it was a necessary plan…I am tempted to give that up. This is the part of the empirical paper that is taking the longest and I am fighting myself to keep with it as I feel once this is is done, I can more easily say:

What specific acts/processes were reported by whom.

How many act of each class/level of racism were found, I am using Harrell (2010)’s conceptualisation which is also not straightforward and quite subjective. It would not be a problem if it was participants classifying their experience but doing it as the research is tricky re: reliability.

It is laborious. It is so tiresome and actually not very gratifying work, it feels like admin…and worse of all I can only summarise these 100s of hours of work in one or two paragraphs.
This is an extract of that infamous table, for those who can read it…

I have decided to only report on 4 of the 5 themes I presented in the preliminary analyses simply because of word limit. I was way over with the 5, by about 4000 words…having taking the last theme out (liberation and healing), I am just within the word limit but not quite done so may still struggle with being over in a couple of days, let’s see.

I have now carried out and posted the preliminary analyses. I do not expect themes and sub-themes to shift significantly in terms of the empirical paper I will submit for the doctorate. I have started to obtain feedback from participants which has been overwhelmingly positive. The data is so rich and dense, I am planning to write additional papers likely to focus on participants’ experience of the different classes of racism. This will not be until next year.

I have now analysed 10 interviews. I have identified over 200 separate incidents of racism and racial injustice. I expect to be able to post main themes and preliminary analyses within the next 2-3 weeks.

I have now analysed 8 interviews. I think I have been able to move past the stuckness I have experienced over the past 2-3 months, perhaps the time pressure is helping.

It has been several months since I have engaged with the research material today I carried out preliminary analysis of interview 6. And I feel each time energised and humbled by the depth of my participants’stories. I am very thankful. Really feel touched in my soul and onto something significant.

It has been a few weeks since I have updated this site as have been busy with clinical activities.

Transcripts have not been obtained yet, save for two interviews so I have not really started data analysis.

A total of 11 people have now been interviewed; including 5 men.

5 interviews have now been carried out, each lasting about two hours.

I set out to interview up to 15 people; this was always optimistic but; I aimed to be covered ethically for a larger number than required to be on the safe side and, in case of withdrawal following interview. Given the duration of the interviews and their depth, I doubt I will go beyond 10. So far 20 people have contacted me to discuss participation. I have attempted to speak to all of them but I have only been able to speak to 12-13 people.  As per research protocol, I am not able to chase participants following our initial conversation which means it is unclear how many of those I have spoken to and that I remain to send the consent form, will eventually take part.  Nonetheless;  I have at least 2 more participants booked in for an interview (including one man). And I am confident at least further two (both men) will be interviewed. Which means that I am very close to having a full sample and may have collected all my data by the end of March; much sooner than expected.

I have now carried out my first interview.

I am starting data collection on February 5th (tomorrow). I am really excited! I have four interviews confirmed/planned for February so far; 2 are pending and 1 is for a man participant 🙂 I am hopeful, for now to be able to collect the data I need by May-June 2018.

11 people have now contacted me to indicate their interest in taking part. Amongst those; 2 non-gender conforming and 1 man. I am speaking to everyone at this stage.

This is my first day promoting of the study. I have already got some interest in taking part but exclusively from women so far 4.